[Once in a Lifetime by Talking Heads in back ground. Seriously! It just came on radio.]

What makes two people able to withstand the ridiculousness of the world and stick together for 25 years? I have been trying to figure that out since I was little and attended my Grandma and Grandpa Johnson’s 25th anniversary party. See, my parents were divorced. Their parents were divorced and widowed/remarried. What makes a marriage last?

Fast forward to today, and in 25 days, I’ll have reached that goal. Married for 25 years. And still ignorant to what makes a marriage last that long. Dumb luck? Stupidity? Ha!

Let’s see if we can figure it out together over the next 25 days. My over/under is on stupidity.

Today we’ll look at the years leading up to marriage. We met in 1990 at a party. We played pitch. We made out. He invited me to golf the next afternoon. I lied to my parents about working, and hence our relationship began. I was 17 and he was 20. I was just “screwing around.” Obviously, we both were.

There was a lot of “Krystal caused” turmoil that first year. Kids, don’t lie to your parents. It just prolongs the inevitable. And makes it WAY worse. But it explains the note on the back of my senior picture he carried in his wallet. (God, I was a dork)

John worked at the mall. Decided to go to college. So, I changed my college plans and followed him. More Krystal caused drama, and finally high school graduation. Here’s photos from my high school years. Note we didn’t have cell phones. We had to get film developed at Walgreens. 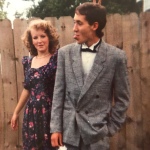 College was weird. We had our own friends due to dorms. Most of my friends didn’t like him. And I didn’t like most of his. Except for one or two.

[I can’t find a lot of college pics. John says I dig it all out and put it back, but not where it came from. So it’s all a mess. He’s totally right. I gave up looking.]

I did find some. The final one was even a selfie. Ha! 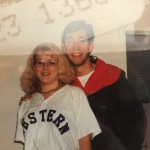 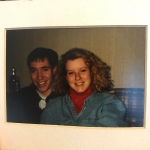 The first couple years at college were filled with too many parties, school, and work. It’s a blur. What isn’t a blur is nobody’s business. Neither of us had focus. Poor grades. Summer school. I even worked at the factory. Believe me, we had fun in there. Trips to other colleges for their parties. Adventures with friends to Great America. U2 concert. Beach Boys and the State Fair. Lots and lots of pitch. Maybe too much fun.

We were officially engaged in 1991, NYE. Right in the midst of it all. For some reason, we never gave up on us. And we were always together. When we weren’t, we didn’t function right.

By the fall of 1993, I was living in the coed dorm, so John was bunking with me while trying to get back into school. Not a big surprise, but we found out we were pregnant. Good old antibiotics and birth control. But it was the wake up call we needed.

By Thanksgiving, our families were bickering over when it was appropriate to get married. We were scared, and in the middle, so we just made the choice. We eloped. We didn’t even do that right. So with help, at 3 months pregnant, we got married.

Guess what, even that was Krystal drama. But John and I didn’t really care. That’s pretty much how we’ve lived moving forward. He doesn’t care what others think. Sometimes I go with it. Other times I follow along after, apologizing for Donkey (he’s an ass you know). Honestly, he says everything I’m too chicken shit to say out loud. And he knows it.

So that’s how we started as the Bellamy’s on November 23, 1993. Just two terrified kids trying to do right by a baby.

View all posts by FindingYourRoadHome