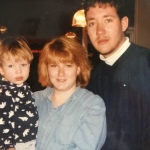 As we celebrated our anniversary in 1996, it was almost graduation time. Our plan was to move to AZ right after Christmas. We packed up the Uhaul and Dad & Le, and off we went.

Right away, John started working at Subway for the Flanagan’s. I found a temp job. Initially, I worked days and John worked nights. Our friend Kara would come during the overlap to watch Alec. It didn’t take long and she was Aunt Kara.

Both John and I took turns going out with Kara. And that spring I took my first girls trip to Rocky Point. 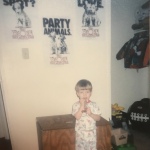 That first apartment was questionable. It was cheap. We got a cat, who helped with pest control. And we stayed there until the Flanagan’s opened a new Subway. We jumped on the opportunity to move closer to that one, and I found a job at a preschool. That meant Alec had to finally go to daycare.

That first preschool was a godsend. We made some friends and had fun that summer. Then, that fall, I secured my first teaching job. Kindergarten.

We bought a second car. Our lemon. We were totally ripped off. The seller even changed his phone number. But that yellow CRX ended up being one of the best cars we ever had.

It was a pretty great first year in Arizona. We had a support system. We had real jobs. We had a nice apartment. We had two cars. We took Alec swimming almost daily. What more could two kids ask for?

Note: not a lot of pictures during this year. We were pretty busy and pictures were still cameras and film developing. Most pictures were of Alec so that the grandparents could still see what he looked like.

View all posts by FindingYourRoadHome